To help you decide if a Vi-Move assessment is right for you, we’ve taken this article from the Daily Telegraph. If anyone suffers with back pain, this gives you more information on how the technology works and how it can help you. The Vi-Move works for more than just Elite Athletes and Sportsmen & women.

Could this new hi-tech fix for back pain change your life?

In the UK, up to four million working days are lost each year to back problems.

Two years ago, after a bout of lower back pain triggered by a gym session, I saw a physiotherapist who told me I had a lordotic posture – I naturally stick my bottom out quite a lot, creating an exaggerated curve at the base of my spine that puts pressure on my lower back. Since then I’ve added Pilates classes to my exercise routine, and try to tilt my pelvis forward to flatten out that curve – but I still experience odd twinges of pain.

I’m not alone. In the UK, up to four million working days are lost each year to back pain. Worse still, in many cases, it’s avoidable. “With the exception of car crashes and acute rugby injury, most back pain is caused by poor posture, whether that’s while running, working out or just sitting,” says physiotherapist Andy Curtis.

“Until recently, this system, called ViMove, was available only to elite athletes”

With this in mind, I have bought a proper office chair with lumbar support for my home office, where I spend much of my day. Most of the time, I’m aware of my posture – feet flat on the floor, back straight – yet all too often, I find I’ve folded one leg beneath me, or crossed it over the other, throwing my back out of line.

So, today, I’m being watched – not by a pair of eyes but a pair of sensors fixed to my back with double-sided tape. The sensors, each about half the width of a smartphone, track my body movement and send the information wirelessly to a mobile phone-sized box that I will keep with me over the next 24 hours. Curtis, director of the physiotherapy subscription service Your Physio Plan, can download the data and discover exactly how my body is moving.

Until recently, this system, called ViMove, was available only to elite athletes – the British gymnastic team, along with Premier League football clubs such as Manchester United and Southampton, use it.

In my first session, Curtis places the sensors on my back before asking me to perform a series of exercises similar to those used to check a patient’s range of motion: bending forwards and backwards, side to side, and demonstrating how you sit and stand. 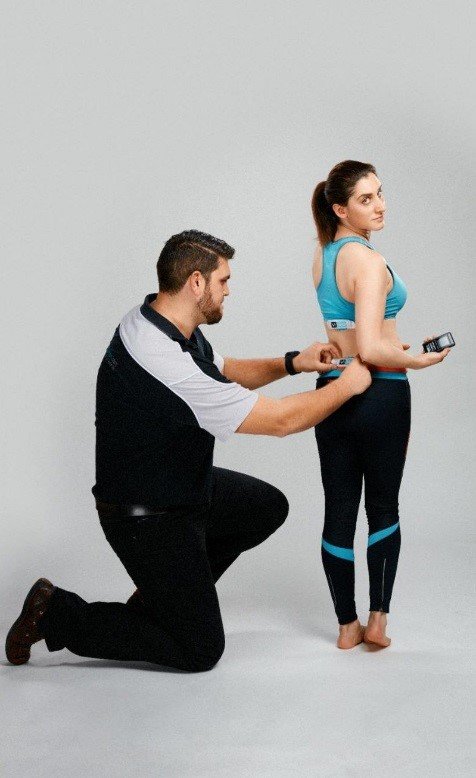 Curtis shows me the results of the assessment on his laptop in the form of graphs and diagrams. “Traditionally, I’d look at how a person moves and what range of movement they have. With ViMove, I can see exactly where that movement is coming from – the spine or the pelvis – and whether it starts and finishes in a way that, even if the patient has no pain now, could cause problems in the future.”

Clinical trials show that 10 weeks of physiotherapy based on ViMove is three times more likely to improve lower back pain than a year’s treatment based on traditional physiotherapy guidelines.

What’s interesting is that while the ViMove report shows up my lordosis, it also reveals that I’m still not getting my pelvis into the correct position. “My suspicion is that the muscles either side of your spine are too tight to allow your pelvis to tilt fully, so we need to address that through manipulation,” says Curtis.

One of the main issues is not the amount of movement I have around my lower back, but the lack of control I have over it. “Although you work out, you need to be focusing more on the muscles in your bottom and the backs of your legs, which will help stabilise your back,” says Curtis.

He is keen to see how I move when I’m not standing in front of him, so I leave wearing the sensors. Over the course of my working day, a Pilates class and while I sleep, I mostly forget the sensors are there, although I remember occasionally while sitting at my desk and sit up straighter. When I return them to him, I’m confident I have nothing to worry about. I couldn’t have been more wrong.

“97 per cent of the time I was sitting down, I was slouching, despite my efforts to do the opposite”

The report shows I spend 50 per cent of my time sitting down, for up to 90 minutes at a time. That’s no surprise. When I’m at my desk, I can move as little as 2km all day. But what shocked me was that 97 per cent of the time I was sitting down, I was slouching, despite my efforts to do the opposite.

Curtis believes this lopsidedness is due to sitting with my legs crossed, or with one leg on my chair. His solution is straightforward. Along with exercises to strengthen key muscles, and physiotherapy to improve my pelvic tilt, he recommends adapting my desk, using something like Ergotron’s WorkFit Sit Stand workstations (from around £185), so that I can switch between sitting and standing while working.

“Standing the whole time would be just as bad,” he says. “But if you alternate between standing and sitting, every 45 minutes or so, and occasionally swap your chair for a Swiss ball, that will make a huge difference.” His advice is corroborated by research published in the Journal of Occupational and Environmental Medicine last month, which found workers with lower back pain were 78 per cent more likely to be pain-free after using a sit-stand workstation.

Crucially, having seen for myself just where I’m going wrong – and knowing that in a few months I can have another assessment to see if I have improved – I’m much more likely to stick to his recommendations and turn my back on back problems for good.

On the 2nd of July 2017 this video was aired on an American news channel.

If you’d like more information about the Vi-Move or to book an assessment at our Well Being Clinic in Bridgend, call us on 01656 652 635. We are the only clinic in Wales to have this breakthrough technology.